In 1961, the name was changed from Stalingrad to Volgograd (“Volga City”) as part of Nikita Khrushchev’s programme of de-Stalinization. This was and remains somewhat contentious, given the fame of the name “Stalingrad” and its importance in wartime remembrance. There were serious proposals to revert the name to “Stalingrad” during Konstantin Chernenko’s brief administration in 1985. There remains a strong degree of local support for a reversion but intermittent proposals have yet to be accepted by the Russian government. 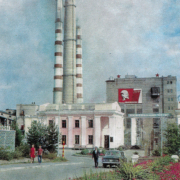