Yessentuki (Russian: Ессентуки́) is a city in Stavropol Krai, Russia, located at the base of the Caucasus Mountains. The city serves as a railway station in the Mineralnye Vody—Kislovodsk branch, and is located 43 kilometers (27 mi) southwest of Mineralnye Vody and 17 kilometers (11 mi) west of Pyatigorsk. It is considered the cultural capital of Russia’s Greek population and even today towards ten percent of its population is of Greek descent. Population: 100,996 (2010 Census);81,758 (2002 Census);85,082 (1989 Census). 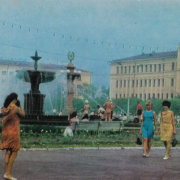