Donetsk (Ukrainian: Донецьк , translit. Donets’k; Russian: Доне́цк, former names: Yuzovka, Staline, Stalino, see also: cities’ alternative names), is a large city in eastern Ukraine on the Kalmius River. Administratively, it is a centre of Donetsk Oblast, while historically, it is the unofficial capital and largest city of the larger economic and cultural Donets Basin (Donbas) region. The city of Donetsk is adjacent to another major city of Makiivka and along with other surrounding cities forms a major urban sprawl and conurbation in the region. Donetsk is a major economic, industrial and scientific centre of Ukraine with a high concentration of companies and a skilled workforce. 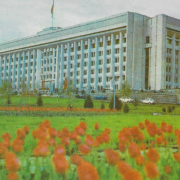