The Azerbaijan Soviet’ Socialist Republic is a generous, beautiful land; its capital, Baku, is a fine city. Having long ago spread over the stone walls of the Icheri-Shekher Fortress, this ancient town seems to have climbed its way step by step up the hills, the shape of a horse shoe, framing the most beautiful bay in the Caspian Sea. On a sunny day town seems as if adorned by an emerald necklace of waves from offshore; at night a starry arc of electric lights along the many kilometre-long esplanade impresses the viewer.

Visitors to Baku are won over by the hard-working and generous nature of the capital’s citizens, their infinite hospitality. People here are proud of their history and its many almost legendary events. It is symbolic that a Memorial to the Twenty-Six Baku Commissars should have been put up in the centre of the city. Here, in the heart
of Baku, an Eternal Flame reminds passers-by of the glorious deeds of the commissars when Soviet power was first established in Aserbaijan. In the years of the first five-year plans the heroic oil-workers of Baku created a veritable river of oil. During the Great Patriotic War of 1941-45 Baku made a valuable contribution to the victory of the Soviet Army over fascism. After 1945, local oil production was vital in restoring the economy of the ruined country.
–
Today, oil is sucked out of rock layers far down under the Caspian Sea. The derricks have moved right out into the sea; and a. wondercity, Neftyanyie Kamni, has grown up on steel piles like a companion city of Baku itself. Here one can see multi-storey houses, green
squares, and a tram service.
–
Stone monuments in Baku and its surroundings ensure that the history of Azerbaijanian culture is not forgotten. Cliff paintings in Kobustan depict hunting scenes, harvesting, ritual dances as they were far back in the eighth millenium B.C. Among the ancient castles and towers for which the Apsheron Peninsula is famous, the Maiden’s Tower is particularly rich in legends. An interesting architectural monument of the 15th-16th centuries, the Palace of the Shirvanshahs, has been preserved within the grounds of the Icheri-Shekher Fortress.
Wide squares and avenues, gardens and boulevards, fountains and monumental sculptures have given the Azerbaijanian capital a modern beauty.
–
The working rhythm of the city continues unslowed; chemical and petrochemical industries, ferrous and non-ferrous metallurgy, electrotechnical, instrument-making and electronic plants have changed the structure of local industry. Today, Baku supplies, cus-
tomers all over the USSR and in other countries of the world with oil equipment, electric motors, radio apparatus, household airconditioners all made here, in Baku.
–
For its services to the revolutionary movement, to the establishment and strengthening of Soviet power and its major contribution to the victory over the fascists in the Great Patriotic War of 1941-45, as well as for its achievements in culture and the economy, the city of Baku has been awarded the Order of Lenin.
I. VEKILOVA 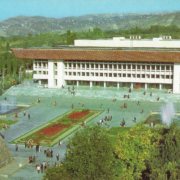